A ceremony, a digital fire, a calling to vibrate in good relations across Indigenous time and space. Curated and led by SJ Norman (Koori, Wiradjuri descent) and Joseph M. Pierce (Cherokee Nation), Knowledge of Wounds will unfold as a series of digital events throughout 2021, foregrounding Indigenous methodologies and leadership to create new spaces for knowledge exchange between First Nations communities across the world. It is one of the first programs of its kind to focus specifically on the intersections of Indigeneity, gender, sexuality, and the body. Centering Indigenous practices of care, sovereignty, and accessibility, the Knowledge of Wounds virtual platform will remain as an Indigenous-led and held archive, handing back centuries of archival and epistemological authority from settlers to Indigenous communities.

The structures and principles for these virtual gatherings are currently being developed,  with individual events to be announced throughout the year as the program evolves. Learn more and sign up for the Knowledge of Wounds eNews HERE.

S.J Norman (b. 1984) is a cross-disciplinary artist and writer. His career has so far spanned 18 years and has embraced a diversity of disciplines and formal outcomes, including solo and ensemble performance, installation, sculpture, text, video, and sound. He is a non-binary transmasculine person and a diasporic Koori of Wiradjuri descent, born on Gadigal land.  Since 2006 he has lived and worked between Australia, Germany, the UK, and the United States.

His practice is routed through the volatile interstices of the social and the corporeal. Working extensively with durational and spatial practices, as well as intimate/one-to-one frameworks, Norman’s primary medium is the body. Drawing on embodied ancestral lineages of ceremonial praxis, Norman frequently utilizes relational and process-based choreographies as a mode of structural critique: reflected in his work is an abiding interest in the space of co- and inter-corporeality, the forces that suffuse it, and how the live act might be utilized as a mean to examine, disrupt and re-inscribe prevailing systems of social power.

Aside from his artistic and curatorial practice, he is also a writer of fiction, essays, and poetry.  He has won or placed in numerous literary awards, including The Peter Blazey Prize, The Kill Your Darlings Unpublished Manuscript Award, The ABR/Elizabeth Jolley Award for Short Story, and the Overland/Judith Wright Prize for Poetry. His award-winning debut short story collection, Permafrost, will be published by the University of Queensland press in 2021.

Joseph M. Pierce is an Associate Professor in the Department of Hispanic Languages and Literature at Stony Brook University. His research focuses on the intersections of kinship, gender, sexuality, and race in Latin America, 19th-century literature and culture, queer studies, Indigenous studies, and hemispheric approaches to citizenship and belonging. He is the author of Argentine Intimacies: Queer Kinship in an Age of Splendor, 1890-1910 (SUNY Press, 2019) and co-editor of Políticas del amor: Derechos sexuales y escrituras disidentes en el Cono Sur (Cuarto Propio, 2018) as well as the forthcoming special issue of GLQ, “Queer/Cuir Américas: Translation, Decoloniality, and the Incommensurable.” His work has been published recently in Revista Hispánica Moderna, Critical Ethnic Studies, The Art Newspaper, and has also been featured in Indian Country Today. Along with SJ Norman (Koori of Wiradjuri descent), he is co-curator of the performance series Knowledge of Wounds. He is a citizen of the Cherokee Nation. 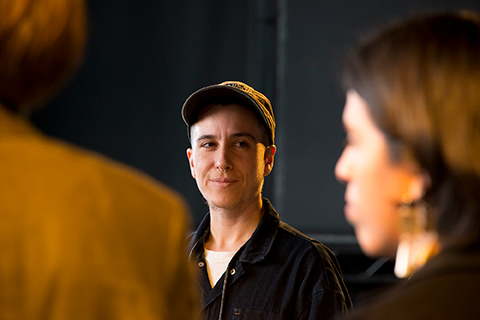